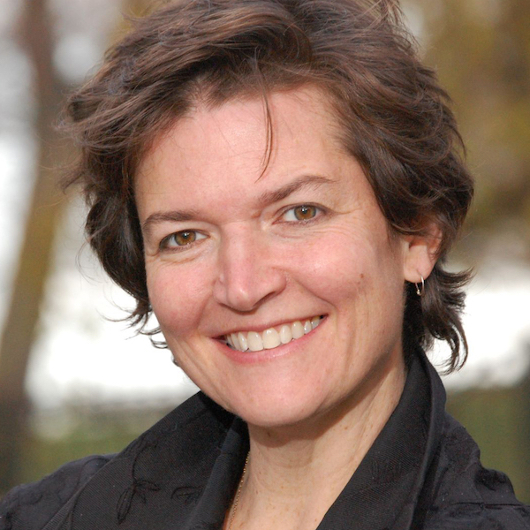 Jessica Thebus is a theater artist, director, and educator. She holds a PhD in Performance Studies from Northwestern University, and is currently Director of the Northwestern MFA Program in Directing for the Stage. She has directed and adapted plays in Chicago and nationally for twenty years, and has long associations with many Chicago theaters. At the Goodman Theatre she has directed A Christmas Carol, Buzzer by Tracey Scott Wilson, and both The Clean House and the world premiere of Stage Kiss by Sarah Ruhl. At Steppenwolf Theater Company she directed four large spectacle evenings at Millenium Park, the plays Sex With Strangers by Laura Eason, Intimate Apparel by Lynn Nottage, Dead Man's Cell Phone by Sarah Ruhl, When the Messenger Is Hot by Laura Eason, No Place Like Home devised by the company, Lady Madeline by Mickle Maher, Sonia Flew by Melinda Lopez, and the Youth Theater program (1998-2001).

Northlight Theater is also an artistic home for Jessica where she has directed eight plays and where she adapted and directed Shining Lives: A Musical which received a Joseph Jefferson award nomination for best new work. Other Chicago projects have been at Lookingglass Theater Company (In The Garden, a Darwinian Love Story by Sarah Gmitter, All Fall Down adapted from Richard Cahan's book, and Our Town by Thornton Wilder). Favorite others include: Richard III at The Gift Theater, The Turn Of The Screw by Jeffrey Hatcher at Writer's Theater, SALAO: The Worst Kind Of Unlucky and The Feast (Jeff award nomination for best new work) at Redmoon Theater, LATE : A Cowboy Song by Sarah Ruhl and Abingdon Square by Maria Irene Fornes at the Piven Theater, as well as the Joseph Jefferson award-winning plays Pulp by Pat Kane and Winesburg, Ohio adapted by Eric Rosen at About Face Theatre. Favorite projects nationally include: As You Like It at the Oregon Shakespeare Festival, Civil War Christmas by Paula Vogel at The Huntington Theatre, Harriet Jacobs by Lydia Diamond at Kansas City Repertory Theatre, The Oldest Boy by Sarah Ruhl at The Marin Theater Company, as well as the Oregon Shakespeare Festival's world premiere of Welcome Home, Jenny Sutter by Julie Marie Myatt, which then moved to the Kennedy Center in Washington, D.C. Jessica is also involved in Outdoor Spectacle projects that celebrate community, joy and environmental justice—these include The Persephone Project and Art Of Spontaneous Spectacle.