(she/her)
Associate Professor; Director of Graduate Studies
marcela.fuentes@northwestern.ed
70 Arts Circle Drive
Room 5-151
Evanston, Illinois 60208
My work studies the role that performance plays in collective action towards social justice. In my research I analyze symbolic, embodied, and time-based modes of communication and intervention in street protests, social media activism, and participatory art from the mid-nineties to the present. I focus on emerging modalities of aesthetic expression, civic engagement, and transnational mobilization, particularly within trans-feminist struggles. 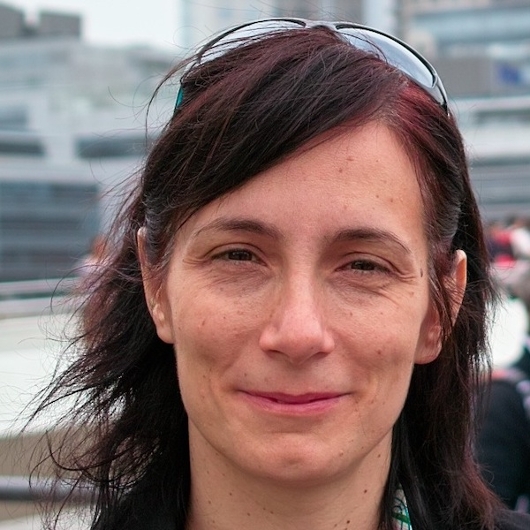 Marcela A. Fuentes is a performance theorist and practitioner whose work tracks how notions that are central to studies of performance such as embodiment, liveness, eventness, and site-specificity are redefined in the era of digitally mediated communication. Her latest book, Performance Constellations: Networks of Protest and Activism in Latin America (University of Michigan Press) maps out the entanglement of street protests and digitally mediated mobilizations in response to state violence and neoliberal exploitation. An expanded version that includes a chapter on transnational feminist mobilizations, Activismos tecnopolíticos. Constelaciones de performance, has been published in Spanish by the Argentine press Eterna Cadencia. Fuentes has been awarded national and international fellowships and grants such as the Fulbright Fellowship and the Andrew W. Mellon postdoctoral research grant. Her work has been published in Text and Performance Quarterly, e-misférica, the Journal of Latin American Cultural Studies, Conjunto, LatFem, Moléculas Malucas, Página 12, and edited volumes on transnational and activist performance. Her research and teaching interests include feminist theory and performance, theories of embodiment, affect theory, queer of color critique, hemispheric performance, practice-based research, and the digital humanities. From 2016 to 2018 she was a member of the Argentine feminist collective Ni Una Menos. She has also served as External Consultant for the Buenos Aires Performance Biennial and Council Member of the Hemispheric Institute of Performance and Politics. Her lecture performance Sujeto Transnacional has been presented in Argentina, Brazil, and the US. Her latest performance #Mar. A Nomadic Lecture opened the academic track of the 2021 Performance Biennial in Buenos Aires.