Associate Professor; Director, Interdisciplinary PhD in Theatre and Drama Program
elizabeth.son@northwestern.edu
Dr. Elizabeth Son is an author, educator, and public scholar who is dedicated to understanding and elevating women's involvement in the performing arts and activism that addresses gender-based issues. 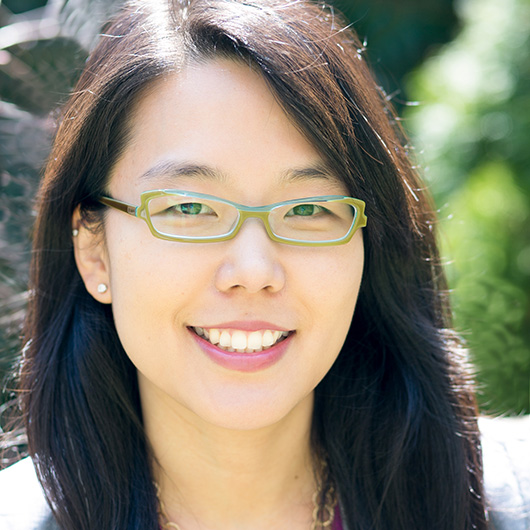 Dr. Elizabeth Son's research and teaching are at the intersections of theatre and performance studies, Asian American studies, Asian diasporic studies, and gender and sexuality studies. Her research focuses on the relationship between histories of gender-based violence and transnational Asian & Asian American performance-based art and activism. She teaches courses on race, gender, and culture; trauma, memory, and violence; and theatre and social change in U.S. and transnational contexts.

Based on extensive archival and ethnographic research, Son's award-winning book Embodied Reckonings: "Comfort Women," Performance, and Transpacific Redress (2018) examines the political and cultural aspects of contemporary performances (protests, tribunals, theatre, and memorial building) in South Korea, Japan, and the United States that have grappled with the history of Japanese military sexual slavery. She is working on a book titled Holding Histories on contemporary Korean diasporic women’s aesthetic practices in relation to social and political violence. Her essays have appeared in Asian Theatre Journal, Theatre Survey, Theater, e-misférica, Oxford Research Encyclopedia of Literature, Race and Performance After Repetition, and The Routledge Companion to Theatre and Performance Historiography. She also writes op-eds, which have appeared in such publications as the Los Angeles Review of Books and The Hill.

Son's work has been recognized with national fellowships from the American Council of Learned Societies, Andrew W. Mellon Foundation, Fulbright Program, and the Institute for Citizens & Scholars (formerly known as the Woodrow Wilson National Fellowship Foundation). Her first book received four accolades: the Book Award in Humanities and Cultural Studies (Visual, Performance, and Media Studies) from the Association for Asian American Studies; the Bonnie Ritter Outstanding Feminist Book Award from the National Communication Association, Feminist and Gender Studies Division; the Outstanding Book Award from the Organization for the Study of Communication, Language, & Gender; and Finalist for the George Freedley Memorial Award from the Theatre Library Association. She is also the recipient of the Florence Howe Award for Outstanding Feminist Scholarship from the Women's Caucus for the Modern Languages, an allied organization of the MLA, and Honorable Mention for the Gerald Kahan Scholar's Prize from the American Society for Theatre Research. Her teaching has been recognized with the Clarence Simon Award for Outstanding Teaching and Mentoring and the Karl Rosengren Faculty Mentoring Award at Northwestern University.

Son is the Director of the Interdisciplinary PhD in Theatre and Drama (IPTD) Program at Northwestern University. She is also affiliated faculty in the Program in American Studies, Asian American Studies Program, Gender & Sexuality Studies Program, and the Department of Performance Studies. Son is also on the editorial board for Theatre Survey and the series co-editor (with Wendy Arons and Melissa Blanco Borelli) of Women's Innovations in Theatre, Dance, and Performance (Bloomsbury).

Through community outreach, education, and political actions—Son, as an ally, also works with local organizations to advocate for gender-based justice, equity, and empowerment. As an inaugural Mellon/ACLS Scholars & Society fellow, she was a scholar-in-residence at KAN-WIN: Empowering Women in the Asian American Community, merging her interests in social justice and the public humanities. In partnership with KAN-WIN and Awakenings, she was also a member of the curation team for the art exhibit "Embodying Justice." Son continues to partner with KAN-WIN as a co-founding member of their "comfort women" justice advocacy team.