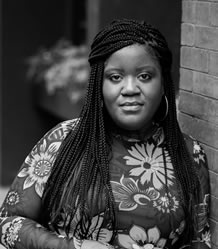 Danielle Bainbridge was a postdoctoral fellow in the Department of African American Studies in the 2018-2019 academic year. She is an assistant professor of theatre and performance studies. Her ongoing book project Refinements of Cruelty: Enslavement, Enfreakment, and the Performance Archive examines the lives of African American sideshow and freak show performers who were also enslaved. Refinements of Cruelty establishes how the improvisational and anticipatory nature of the archival practices of slavery are mirrored in 19th century freak show performances that span the ante-bellum and post-Civil War United States. She calls this anticipatory accounting a ‘future perfect’ practice of archive and performance that considers “what will have been” rather than just the historical past tense. She theorizes that the archival structures that recorded enslavement and enfreakment on the sideshow stage are deeply invested in accounting equally for performers’ physical bodies as well as their performance labor. This creates a system of fungibility whereby the unfree enfreaked body accrues high value as an object of spectatorship and performance even as the terms of bondage renders that same body abjectly valueless as a traditional enslaved laborer. This occurs both onstage during life and also in the archive after death. Her project received the support of a Ford Foundation pre-doctoral fellowship (2014-2017).

In addition to her academic research, Danielle is also a creative writer, playwright and web series host. She is the researcher, writer, and host of the PBS Digital Studios web series The Origin of Everything which focuses on highlighting unusual and under told history and streams on Youtube and Facebook Watch. Her creative nonfiction and fiction appears in Moko Magazine, Killens Review of Arts & Letters, and The Mechanics’ Institute Review Online. She was the inaugural winner of the 2015 Barry Lopez prize for creative nonfiction from Cutthroat: A Journal of the Arts (judged by Nick Flynn) and a semi-finalist for the Kore Press 2016 memoir award. She received a 2016 scholarship from the Tin House creative writing workshop in Portland, Oregon. Her first play Curio premiered at the University of Pennsylvania in April 2018 and also appeared at the Edinburgh Festival Fringe in August 2018.

“Autopsy and Enfreakment on the 19th Century Stage.” (Under revision 2019, TDR).

“The Hospital: The Spit in My Mouth Heals the Wounds on My Tongue.” The Best of Cutthroat: A Journal of the Arts. March 2016. (Creative Nonfiction 2016)