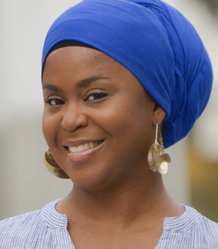 Her artistic work has garnered recognition and grants from the likes of the 2019 Creative Capital Award, the National Theatre Project Grant (New England Foundation for the Arts), Ford Foundation, Theatre Communications Group, National Foundation for the Advancement of the Arts, MAP Fund, and the National Performance Network’s Creation Fund Grant. She is a recipient of the Doris Duke Impact Artist Award, which honors artists who are influential in the shaping of powerful creative movements in contemporary dance, jazz, theatre, and related multidisciplinary work. For more about her work, visit ProgressTheatre.com.

Dr. Truscott’s scholarly research focuses on representations of spiritual diversity in African American Theatre before 1950, most recently featured in The Routledge Companion to African American Theater and Performance (2018). She has served as assistant editor of the performance journal, TDR: The Drama Review; associate editor for Azizah Magazine; and on the editorial boards of the publications Women and Performance: A Journal of Feminist Theory and Black Masks Magazine: Theater and Entertainment.

Dr. Truscott is currently working on her book SoulWork: Methodology from the Cultural Conservatory, which traces the development, philosophy, and practical application of her generative method for training artists, building ensemble performance, and connecting communities. Soul Work is a comprehensive training method and generative practice for acting, directing, playwriting, devising, ensemble building, and community engagement designed to cultivate emotional, social, and creative power in artistic expression.

Plantation Remix, a site-responsive acapella musical, will be performed at historic plantations and related sites to revisit, raze, and reimagine the separatist genre of plantation tourism by rehabilitating the singular story of antebellum glory through shared histories and multiperspective narratives of both enslaved and slave-holding families and their descendants, with a central tenet that no American identity—across a multicultural range of experiences—is left uninformed by the systemic and sociocultural descendants of US Slavery.

Dr. Truscott’s scholarly research investigates and excavates oral traditions, cultural knowledge and community practices as performance methodology for use by artists/practitioners, educators, community-invested programs and arts organizations seeking to offer inclusive, dynamic artist training, curricula and/or programming. Her research interests also include examination and analysis of representations of spiritual diversity in African American Theatre before 1950, featured in The Routledge Companion to African American Theater and Performance (2018).