(he/him)
Associate Professor of Instruction
clayton@northwestern.edu
Annie May Swift Hall
1920 Campus Drive
Room 317
Evanston, IL 60208
Website
I’m a narrative and documentary filmmaker. My non-fiction work explores people pursuing passions and obsessions in our strange country, often in the face of insurmountable odds. My fiction work explores similar themes, often in the past or the future (often in science fiction), but sometimes in an unrecognizable present, with strange sounds and special effects. 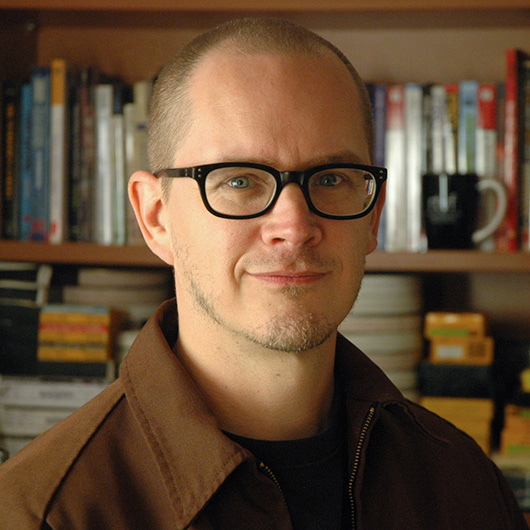 Clayton Brown is a documentary and narrative filmmaker. His last three documentary features, co-directed with Monica Long Ross, were created under the Chicago-based non-profit 137 Films production company he co-founded with Ross. The Atom Smashers, aboutAmerica’s search for the Higgs boson, won the Pariscience Audacity award and was broadcast twice on Independent Lens, securing North American distribution with PBS. The Believers, about the controversial 1989 announcement of Cold Fusion, premiered at the Chicago International Film Festival where it won the Gold Hugo for Best Documentary as well as Best Documentary at the Maryland International Film Festival. The Believers is distributed in North America by Gravitas Ventures and internationally by TVS. We Believe in Dinosaurs, Brown and Ross’s most recent documentary, is about the building of a life-sized Noah’s Ark by the Creation Museum in northern Kentucky as they attempt to prove the Earth is only 6,000 years old. We Believe in Dinosaurs premiered at the San Francisco Film Festival as part of their prestigious “Launch” initiative, where it was picked up for North American distribution by 1091 and international distribution by Cinephil. After an extensive national and international festival run where it garnered Best Documentary at the St. Louis International Film Festival and received a 91% “fresh” rating on Rotten Tomatoes, it was broadcast on Independent Lens. It’s currently available on Amazon Prime, iMovies, Vudu, and other platforms. PBS commissioned an additional short documentary from 137 Films on the Bill Nye / Ken Ham debate of 2014 for broadcast in March, 2021.

Brown is in production on a new documentary feature, Duneland, about life in the heavily polluted areas of East Chicago along the coast of Lake Michigan, where political and environmental corruption led to the building of minority and low-income communities in and around the most toxic areas in the country.

Brown's films have been screened at over 40 film festivals in the US and abroad. His documentaries have been distributed by PBS, Gravitas Ventures, 1091, Cinephil, and TVF and screened on Independent Lens, iTunes, Amazon, Vudu, Xbox, and elsewhere.