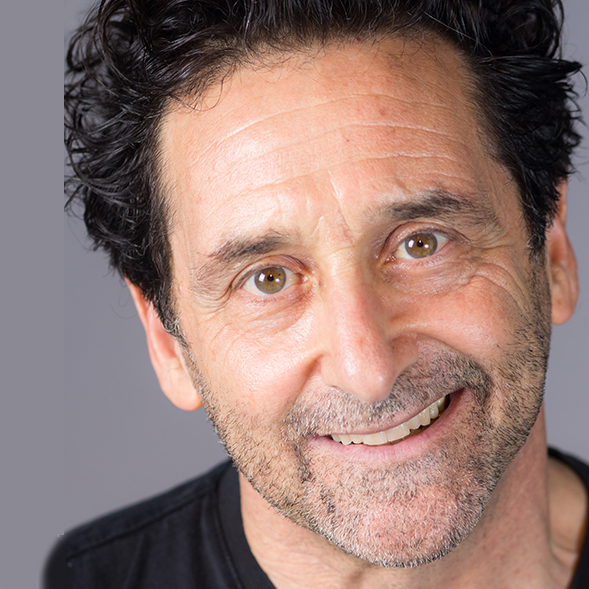 Billy Siegenfeld is a former jazz and rock drummer; a present-day vocal-rhythmic theatre-movement actor; the founder, artistic director, choreographer, and musical arranger of the theatre company Jump Rhythm® (www.jumprhythm.org); an author of essays and plays; and a Charles Deering McCormick Professor of Teaching Excellence in the Department of Theatre at Northwestern University.

The courses he teaches both at Northwestern and in national and international residencies are guided by two holistic, “less is more” concepts:

The courses he teaches using these two concepts are:

His creative work focuses on building theatre performances out of primal human behaviors. The emphasis is on the expression of energy, not shape – on articulating the energies we feel at our most relaxed and unself-conscious, rather than the looks we display at our most self-conscious and public. This process turns fusions of rhythm-driven motion, song, and speech into stories that laugh, cry, or rant about our species’ most dominant condition: believing that we never have enough; tampering with Mother Nature to get more than enough; and then realizing – when we replace overreaching social constructs with ungreedily-reaching human behavior – that what we already have is enough.

Springing from this idea is his play with music and rhythmic movement, What Do You Want To Be When You Give Up? It premiered at the Mark O’Donnell Theater in New York City in 2019 and the Bathway Theatre in London the same year. In the 2022-2023 season, a revised version of the play is scheduled to be performed in a return engagement at the O’Donnell Theatre, at theatres in Berlin, Germany and Toulouse, France, and on tour in the New England states.

His most recent essay (in manuscript) is “Democracy’s Energy.” The subtitle suggests its multi-thread narrative: “How the African-American gift to the world called swinging a beat beats back despair; says letting go is better than holding on; reminds us no pedestal works better than the ground we stand on; and teaches democracy can only work when we practice it on ourselves.”

His first book (in manuscript) is titled STANDING DOWN (NOT UP!) STRAIGHT: How to Make Gravity Your New Best Friend and Ground Your Body, Soothe Your Soul, Know You Can’t Always Get What You Want, and, along the way, Relieve Lower-Back Pain.

Previous published essays include “Performing Energy: American Rhythm Dancing and ‘The Great Articulation of the Inarticulate’ ” (2014); “The Art of Misbehaving: Youth, American Rhythm Dancing, and the Need to Not Be Good” (2012); “Standing Down Straight@: Jump Rhythm’s Communally Engaged-In, Rhythm-Driven Approach to Performing Arts Education” (2009); “Opening the Door: Teaching to the Person Inside the Student” (2002); and “If Jazz Dance, Then Jazz Music” (1992).

He received a bachelor’s degree in literature from Brown University and a master’s degree in jazz music and dance from New York University’s Gallatin Division. His thesis was titled “Hunting the Rhythmic Snark: The Search for Swing in Jazz Performance.” When living in New York City, he performed with modern dancer and choreographer Don Redlich; directed the dance program of Hunter College; performed as an actor-dancer-singer in off-off-Broadway shows and in the Broadway production of Singin’ in the Rain; and studied Meisner-based acting with Tim Philips and natural-voice singing with Joan Kobin.

After becoming injured from years of dance training that emphasized pushing the body beyond its nature-given limits, he studied an approach to human movement called ideokinesis as taught by André Bernard. Ideokinesis uses gravity-directed, skeletal relaxation to heal the body and, in a seeming paradox, power it. It is based on the ideas of posture and motion innovated by Mabel Ellsworth Todd. In The Thinking Body, she both analyzes and affirms what our cousins the animals are experts at: letting the body do what it wants to do rather than what we, at our most overreachingly overcontrolling, think it should do. Todd’s point of view inspired the creation of Standing Down Straight®.

He also works for the environment. As an Openlands TreeKeeper, he helps maintain park trees around Evanston and works with a group of volunteers to ensure the health and preservation of the town’s Clark Street Beach Bird Sanctuary.

Billy Siegenfeld is a writer on various subjects, including vernacular-bodied, jazz-rhythm-based performance; teaching to “the person inside the student”; and “Standing Down Straight®,” a gravity-directed, injury-preventive approach to both actor training and everyday behavior.

His most recent article, “Performing Energy: American Rhythm Dancing and ‘The Great Articulation of the Inarticulate’,” appears in an anthology of jazz writings, Jazz Dance: A History of the Roots and Branches. His next article, “Democracy’s Energy,” will appear in a text on Jump Rhythm titled Democracy’s Energy: Getting Down to Go Forward.

In partnership with Jump Rhythm Jazz Project, he has received grants from the Illinois Arts Council, the Elizabeth F. Cheney Foundation, the Gaylord and Dorothy Donnelley Foundation, and the Richard Driehaus Foundation.