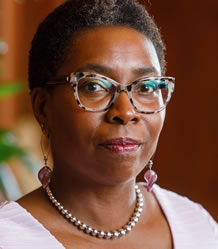 Prior to Joining Northwestern, Dr. Coleman served as vice president & associate provost for diversity and professor in the Department of Communication at Texas A&M University. There she implemented the University Diversity Plan, thereby leading efforts in accountability, climate, and equity. She also provided strategic and scholarly leadership on practices and measures that advance diversity and inclusion progress in diversifying the faculty, staff, and student body, with an emphasis on recruitment, retention, and progression. She worked collaboratively with faculty, staff, and students across Texas A&M’s 16 colleges and schools, two branch campuses, Health Science Center, and University Libraries.

Dr. Coleman is the author of Horror Noire: Blacks in American Horror Films from the 1890s to Present (2011, Routledge) and African-American Viewers and the Black Situation Comedy: Situating Racial Humor (2000, Routledge). She is co-author of Intercultural Communication for Everyday Life (2014, Wiley-Blackwell). She is the editor of Say It Loud! African American Audiences, Media, and Identity (2002, Routledge) and co-editor of Fight the Power! The Spike Lee Reader (2008, Peter Lang). She is also the author of a number of other academic and popular publications. Her research and commentary have been featured in a variety of international and national media outlets. Her documentary film, Horror Noire, made its international premiere in 2019 to critical acclaim. To-date, Horror Noire has won the 2020 Rondo Hatton Award for Best Documentary and the 2019 FearNyc Trailblazer Award.

Dr. Coleman has earned numerous awards for her teaching and mentoring. She is the recipient of the John Dewey Award for undergraduate education, the Undergraduate Research Opportunity Outstanding Mentor Award, and the Harold R. Johnson Diversity Service Award, all from the University of Michigan. She earned the New York University School of Education Award for Teaching Excellence. She is the recipient of the Minority Access National Role Model Award, the Chatman Women’s Foundation Icon Award, and the Delta Tau Lambda Sorority, Inc. “Commitment to Excellence” Award. She currently holds the Texas A&M/College of Liberal Arts Cornerstone Faculty Fellowship which funds her undergraduate student research lab, “The Black Fantastic.”