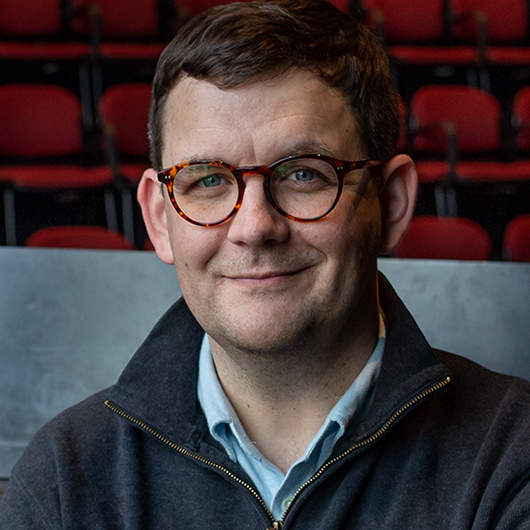 John Haas is an Assistant Professor of Instruction and Undergraduate Academic Advisor in the Department of Theatre. He advises, mentors, and supports students in the Theatre major and Music Theatre Certificate Program to moments of self-discovery as they progress through their academic journey at Northwestern.

His research and professional work focus on vocal music technique and pedagogy, music theatre history, and music theatre repertoire. He is a member of the Music Theatre voice faculty, teaching applied voice for the Music Theatre Certificate Program and the MFA in Acting Program. He also created a series of Music Theatre Repertoire courses focused on various composers such as Stephen Sondheim and Rodgers & Hammerstein. He has been a guest clinician for many organizations and institutions, including the world-renowned Interlochen Center for the Arts. He maintains professional private voice studios in Chicago, New York, and globally online. He appeared in Jeff Award-winning productions of LES MISÉRABLES and SWEENEY TODD. He was a featured performer in the American Music Theatre Project’s reading of the Boublil and Schönberg musical, LA REVOLUTION FRANÇAISE. In summer 2022, John presented a letter he received from the late Stephen Sondheim at the "Yours, Stephen Sondheim" concert at Ravinia where he also performed with the great Heather Headley, Brian Stokes Mitchell, and the Chicago Symphony Orchestra. John is a proud member of Actors’ Equity, the National Association of Teachers of Singing, the College Music Society, and the Musical Theatre Educators’ Alliance.