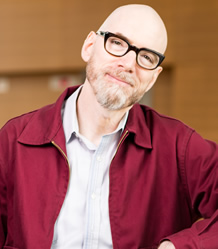 David E. Tolchinsky is the founding director of Northwestern University’s MFA in Writing for Screen and Stage program and current director of the Pritzker Pucker Studio Lab. He is a longtime screenwriter (for various Hollywood studios) and sound designer/composer, and an emerging playwright, director, and producer. His work, which spans comedy and darker fare, often involves teenagers, dystopias, trauma, memory, and mental illness. Lately, his work has been centering on health and illness in the modern world, especially illnesses that are not easily explainable. His film credits include the experimental narrative Creature Companion (producer); the psychological thriller Cassandra (writer/director/composer/sound designer); the documentary Fast Talk (co-producer); the dramatic thriller The Coming of Age (co-producer/screenwriter); the dark comedy Girl (associate producer/screenwriter, from Sony, starring Selma Blair and Tara Reid); the documentary St. Catherine’s Wedding Ring (co-producer/co-director, premiered at Sundance); and Debra Tolchinsky’s The New York Times’ Op-Docs documentary Contaminated Memories (co-producer/composer). In theatrical work he was voted Best Director in 2015 for the New York production of his play Where’s the Rest of Me? (which was nominated for Best Play); he co-curated Sick by Seven (seven plays/films about mental health in the modern world) at A Red Orchid Theatre in Chicago as part of its Incubator Series; he recently directed his dark comedy An Attempt to Heal in the Contemporary World, about the rogue psychologist Wilhelm Reich, in New York City; and his play Where’s the Rest of Me? was produced as part of the Road Theatre’s Summer Playwrights Festival. Beyond the screen and stage, Dave co-curated The Horror Show at Dorsky Gallery Curatorial Programs in New York City; Shimon Attie: The Neighbor Next Door at the Block Museum, Evanston, Ill.; and The Presence of Absence at the Hairpin Arts Center in Chicago. Dave is developing a TV series about Wilhelm Reich called Heal, the feature version of the thriller Cassandra, a one-person show called Why Ask for the Moon, and is co-producing and scoring Debra Tolchinsky’s feature documentary True Memories and Other Falsehoods (currently in production). Most recently, he produced (along with Brett Neveu and Neil Edelstein) the feature film Night’s End, written by Neveu, directed by Jennifer Reeder, and starring Geno Walker with Michael Shannon and Kate Arrington, to be released on Shudder/AMC on March 31, 2022. He is habitually included on New City’s Film 50: Chicago Screen Gems list. Tolchinsky served as the chair of the Department of Radio/Television/Film from 2007 to 2018. More at davidetolchinsky.com.

2015 Full-length play, Clear, one of six selected to be published in Issue 3/2015 of Proscenium Theatre Journal. The journal also published a long interview with Tolchinsky.

2013 Essay, “Where’s the Rest of Me?” thoughts on Spalding Gray and monologue-writing. In Paraphilia Magazine, March 2013 issue. www.paraphiliamagazine.com/periodical/wheres-the-rest-of-me/

For An Attempt to Heal in the Contemporary World (written and directed by Tolchinsky at the HB Studio’s Playwright’s Theatre as part of the 2018 New York International Fringe Festival):

Broadway World, Oct 4, 2018, “An Attempt to Heal in the Contemporary World Comes to FringeBYC”

Splash Magazine September 27, 2018, “An Attempt to Heal in the Contemporary World Preview – A Dark, Screwball Comedy” by Barbara Keer

For Sick by Seven (the night of plays/videos co-curated by Tolchinsky at A Red Orchid Theatre, Chicago):

For The Coming of Age (short film written and produced by Tolchinsky):

For Where’s the Rest of Me? (one-act play written by Tolchinsky):

Interviewed/quoted in The Chicago Maroon, “Grant Will Explore Echoes of Hollywood in ISIS Propaganda,” by Emily Kramer, February 23, 2016
Interviewed/quoted in ABC7Chicago’s “HOW ISIS RECRUITING VIDEOS MIRROR HOLLYWOOD SCRIPTS,” by Chuck Goudie and Barb Markoff – live and on their web site, February 9, 2016
Interviewed/quoted extensively in New Writing: The International Journal for the Practice and Theory of Creative Writing, “Script Development and the Hidden Practices of Screenwriting: Perspectives from Industry Professionals,” by Stayci Taylor & Craig Batty, December 14, 2015
Interviewed/quoted in The Chicago Tribune, “New ‘Star Trek’ episodes push us closer to streaming service overload” by Nina Metz, November 4, 2015. Picked up nationally via newswire services so published in multiple local newspapers and web sites.
Interviewed/spotlighted about the meaning of Spock and Leonard Nimoy’s death (and mostly my Spock collection) in The Chicago Tribune, “Northwestern Professor Has Spock Collection that’s out of this World” by Duaa Eldeib, February 27, 2015
Interviewed/quoted extensively, Yale Daily News, “Screenwriting grows amidst limited resources” by Caroline Wray, November 21, 2014
Interviewed/quoted, The Independent, “Outsider Writers: Four Not-in-LA Grad Programs in Screenwriting,” by Jared M. Gordon, March 26, 2013 regarding one of the four programs was NU’s MFA in Writing for Screen and Stage which I direct.