Thunderstorms might have delayed the School of Communication Convocation June 12 by a couple of hours, but that wasn’t going to stop the Class of 2021 from walking across the stage at Ryan Field.

“The fact we’re here together is nothing short of a miracle, rain be damned,” said School of Communication Dean E. Patrick Johnson who praised the Class of 2021 for all they’ve endured this last year, including a global pandemic. “Your resilience is awe-inspiring. Trailing a year that has taken so much, I’m buoyed to see you as a group so willing and able to give time, give expertise, give yourself space and grace to be and become.” 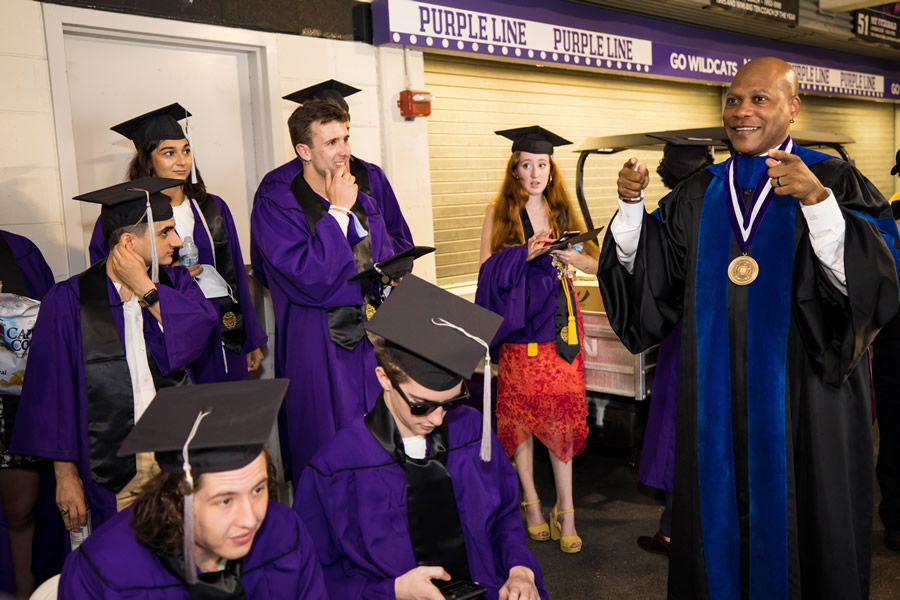 The nearly 300 graduates of the class of 2021 had been told to evacuate into the field’s concourse as the storm—the only rain forecast for weeks in the Chicago area—barreled in from the west. They waited it out, and even got an encouraging surprise visit from Dean Johnson, before the sun broke through and signaled the ceremony could begin. Convocation landed on the day after Illinois loosened COVID-19 restrictions, including mask mandates, suggesting to the palpably joyful crowd that something closer to “normal” was imminent—something also implied by the in-person ceremony after their mostly virtual senior year.

Convocation student speaker and communication studies major Cate Wolfen (C21) said in the last year she’s realized how lucky she feels to be part of the Northwestern community.

“I’ll always remember the sense of pride I felt watching us all adapt to this year,” she said. “Putting on countless virtual performances and events that rivaled any 2021 award show I saw. Making the most out of the worst, and turning the COVID testing center into the most social place in Evanston since the closing of [popular Evanston Italian restaurant] La Macc.”

Ebs Burnough (C02), a filmmaker, writer, producer, and marketing communications executive, delivered the convocation address at this year’s ceremony. He is the former White House Deputy Social Secretary and Senior Advisor to Michelle Obama and the director of the upcoming documentary The Capote Tapes, which uses a never-before-heard audio archive. He urged students not to let others define them with labels.

“I realize the world is full of haters and doubters, and everyone is trying to put a label on you,” he said. “Maybe you think people judge you for the way you look. Or the way you talk. Or the way you love…. You have survived a global pandemic. Do you really have time to waste on this? Do you really have energy to feel this kind of fear? You can’t afford that. The world can’t afford for you to do that either. You’re entering a world with a hell of a lot of problems. Maybe you’ve heard about climate change? Inequality? Hunger? Systemic racism? A little thing called coronavirus? So, we need you, and we need you at your best.”

Burnough talked about his less-than-linear career that took him to the White House and beyond.

“With a myriad of different experiences, sometimes I found myself in rooms thinking: ‘What the hell am I doing here?’” he said. “But I worked hard, did the best I could, and I found that a Black, gay, communication and theatre major fit in a lot more places than a lot of people thought. And perhaps a lot more places than I thought. And I want you all to know that. You can make a place for yourself anywhere.”

Burnough also discussed the fact that he understands many graduates have trepidation about entering a world with so much uncertainty. When he was a teenager, he and his mother began building a home in northern Florida. The two of them received veiled threats that they weren’t welcome in the neighborhood. When the two of them left for a brief trip, they returned to find their house burned to the ground. Burnough said he was gripped with fear.

“For me, the answer was simple. Get out. I was willing to compromise our ability to live where we wanted because of fear,” he said. “My mother was defiant. She said, ‘We’re going to rebuild that home whether we’re welcome or not.’ And that’s what we did. We lived there through the rest of my high school years and celebrated my acceptance to Northwestern in that very house. And we loved each other. And we loved our home, and we showed up for our neighbors, and many of them showed up for us. That’s what my mother taught me about fear. You look it in the eye, you smile, and you build.”

Burnough told the graduates he thinks of life as a swing set. “There are highs and lows, ups and downs, but no matter how fast it feels like you’re falling, you’ve just got to keep kicking forward.”

At the end of his speech, he instructed the members of the Class of 2021 to pull out their cameras and take a selfie.

“In the future, there will be days you don’t feel so glorious, and you question yourself and you doubt yourself, and you will be your own worst critic. It’s happened to me. It’s happened to all of us,” he said. “I want you to look back on that picture you took of yourself. Captured forever in those pixels, that is a person who survived the strangest senior year possible, who worked a lot of long hours and late nights, who has the whole world in front of them. A person, who, in the midst of a global pandemic, overcame every hurdle and earned a diploma from the best damn university on the planet…No matter what happens in the future, that person will always be there for you. Right when you think your legs are giving out, that’s the person who will kick forward. At the end of the day, that’s what really matters.”

PrevPreviousSoC Alum and Former Obama Advisor to Address Class of 2021
NextEmmy Award Nominations Put Focus on ‘Cats, On and Off CameraNext