It’s funny how our alumni in comedy want to give back.

Case in point: prolific writer, performer, and MFA in Writing for the Screen Stage alum Jen Spyra (GC12) served up inspiration, guidance, and encouragement to the Northwestern community April 9 during a Zoom Q&A session. Sponsored by EPICS and hosted by Department of Radio/Television/Film lecturer, playwright, and performer Eliza Bent, the virtual Q&A touched on a range of topics from Spyra’s time working as a staff writer on The Late Show with Stephen Colbert to her new project, a book of satirical shorts titled Big Time Stories—which includes a forward by Colbert (C86, H11) himself. 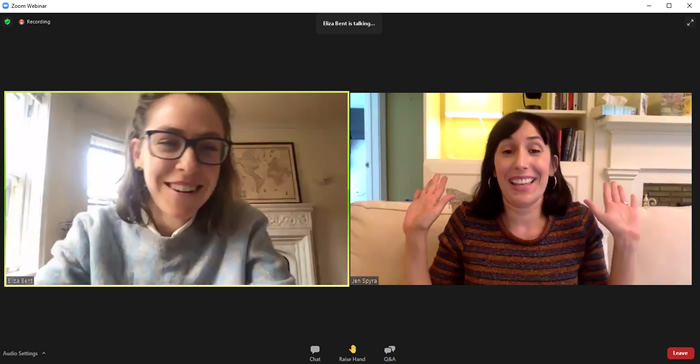 “I started writing these stories five years ago when I was at Colbert,” said Spyra, who also worked as the announcer on The Late Show and voices Hillary Clinton and Jill Biden on Showtime’s animated show Our Cartoon President. “And coming from a collaborative environment, the freedom and responsibility of writing this book was unbelievable awesome. Mainly, it was just good. The only thing that’s stressful, and anxiety-inducing is the buck stops with you. There’s no one to blame, no one to look at and say it’s their fault if something’s not good.”

Bent, in asking Spyra how she got her start, noted that she felt delight and relief in learning that the writer didn’t grow up in the comedy world.

“I find I learn that often about some of my favorite comedy writers,” Spyra said. “They were not comedy people as kids. I only became aware of comedy and started thinking about comedy as a career after college in my early 20s, before I even (went to) Northwestern. Before that, I was a huge reader, and I loved old Hollywood and watched a lot of film noir. I was an English major at Barnard; there was a lot of dark English or American 19th Century literature. I never watched late night, had no interest in it, and was not any ‘class clown’ person. I really only made quiet sarcastic remarks to friends.”

This may come as a surprise to fans of Spyra, who know well her wit and fearless silliness from The Late Show, The Onion, McSweeney’s, and a series of New Yorker essays. Big Time Stories has been lauded by Vanity Fair, The Hollywood Reporter, and Vulture, which recently named it one the best comedy books of 2021 (so far). But surprise is part of the package, especially given her roots in the improv scene.

“The first hit that you’re always chasing is when you do a fun scene, the first time this happens, and you’re writing something on the fly with someone else, and you surprise yourself,” she said. “That is the fun part, and I’ve heard other improvisers, veteran performers, say that’s when they’re having fun, when they’re surprising themselves.”

Aspiring writers view successes like Spyra’s with a mix of admiration and awe—and a misplaced assumption that the jokes, stories, ideas, and wins come easy to her. Not so, she says.

“Anytime you have to pitch a lot, it’s a volume game. Keeping your spirits up is an art,” she said. “It’s kind of like when you break up with someone and it’s devastating. The only thing that actually makes you feel good again is when you have a crush on someone else, and you have success again in love. It’s the exact same thing after a rejection. The only thing that makes you feel good is to get a hit. You’re rejected, your jokes were cut, or your pitch doesn’t even get in, and you will feel bad until one gets in. And that’s what does suck. This was how I felt about it—I was going to be uncomfortable until I had a success.”

Relentlessness and resilience are essential to comedy writers, but so is the full-time commitment to the craft, which Spyra made when she decided to enroll as a student in the MFA in Writing for Screen and Stage.

“The program sounded so fun, and almost like a fantasy that for two years, I can just focus on writing and I don’t have to do any of these stupid day jobs,” she said. “But I could literally get student loans. The whole thing was just loans, and I didn’t feel like I had to work a job when I was doing it. Probably a more financially savvy person would’ve done that. But I was just like, ‘I’m not gonna.’ It felt legitimate enough that I could be like, ‘I think it’s not crazy to take out these loans, and before anyone else has really voted on me, I can vote on this.’”

Spyra also said the much-celebrated “Purple Mafia”—the active and engaged Northwestern alumni network—is real. She benefited when another alum of the MFA program, Andy Miara, connected her with The Onion, where she became a staff writer. Dave Tolchinsky, codirector of the MFA in Writing for the Screen and Stage, viewed the virtual Q&A and raved about his former student.

“We’re so lucky to have Jen Spyra as an alumna of the MFA in Writing for Screen and Stage, someone who bravely moves from one terrain and one genre to the next, who also has a generosity of spirit and giving back,” he said. “From the time Jen Spyra was in my classroom writing funny short scripts to writing for Stephen Colbert and now to writing funny books – Jen has always been and will also be a unique, fearless, and highly gifted soul. And mostly, she’s just f’ing funny. Yay, Jen.”