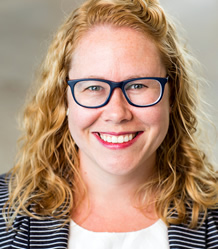 The coronavirus pandemic has had profound impacts on the research community, both in terms of who is able to participate and the efficacy of the standard methods of data collection.

Yet assistant professor Elizabeth Norton has discovered one advantage in the resulting social separation: gathering certain data via video chats can be just as effective, if not more so, as doing so in-person. This is not only a boon to Norton’s work with children and language development, it’s a meaningful step toward increasing access and equity in researching underrepresented and underserved populations.

“This came about a couple of years ago when we were talking with our colleagues at LEAP about what their director Kate Gottfred (GC73, GC79) calls ‘language wellness’: the idea that kids who are growing up in underprivileged environments hear fewer words than kids from more advantaged homes and neighborhoods,” says Norton, who leads the LEARN Lab in the Roxelyn and Richard Pepper Department of Communication Sciences and Disorders. “They were working on designing an app for parents to learn and be reminded to give high quality and quantity of language to their little kiddos. We started talking about: is there a way to see if this is working? We knew it wouldn’t be as feasible for families from low income neighborhoods to come into the lab in Evanston. So we said, why don’t we do this over video chat?”

During the sessions, the parent and child play together, and Norton’s team transcribes the child’s words from video. These naturalistic language samples allow researchers to quantify many aspects of language ability. Norton and her colleagues discovered that these remote chats, or play sessions, worked as well as data gathered from the families who came in person to the lab. Norton said that the quality of the samples was often better, as the children were in their homes speaking freely and comfortably and not confined to the parameters set by standardized language measures. Also, researchers could collect the data at any time, not just when a participating family was able to find time to come to the lab.

While they had already planned to write a paper on both the data they gathered during the video chats and the effectiveness of the video chats in terms of tracking child development before Covid-19 became widespread, the pandemic’s arrival last spring made focusing on their successes in collecting video data even more pressing.

“In the spring, as it started looking like in-person research wouldn’t be happening for a while, we really pushed to try to get the information out,” she said. “We looked and nobody had ever tested whether language samples were the same over video chat. So the important thing was we had was a subset of kids in this study who’d been assessed over video chat, and some who’d come into the lab. So they did two video chats in the lab and two video chats at home, and then we had a big group of kids do just video chats at home, so we could compare those groups.”

Norton said she hopes this will help other researchers continue their research safely and effectively, even during the pandemic.

“It’s going to be important not only for other researchers but also because this can be used as an effective clinical tool,” she said.

Now, Norton’s research focuses on how the pandemic is affecting families: closures of daycares and schools can mean that children aren’t getting the same exposure to early vocabulary that they might have otherwise. While an increase in one-on-one parent time might be a benefit, there could be other drawbacks including extra stress for both parents and children, which could make focusing on language development during these unprecedented times difficult. Norton said parent stress might led to less meaningful word interactions with children, as patience is stretched thin, and families struggle to deal with a constant disruption of routines. This also may lead to more screen time, which can be adversely correlated with language development.

Norton and her team received last summer supplemental funding from the National Institute of Health to track how the pandemic is affecting language development in a diverse group of children already in her studies. She will continue to gather data remotely and use her findings to further our understanding of child development.

By Cara Lockwood and Kerry Trotter