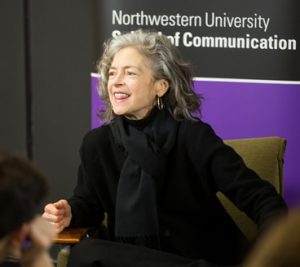 Throughout her career, Martha Lavey (C79, GC86, GC94, H10) has followed her intuition. That, said the artistic director of Steppenwolf Theatre Company, is what leads her to projects and people fueled by passion. She discussed her experience and shared advice with students January 7 during a monthly speaker series sponsored by the School of Communication’s Master of Science in Leadership for Creative Enterprises (MSLCE) program. Assistant professor of theatre Jessica Thebus (GC91, GC97), who is an associate artist with Steppenwolf, as well as the director of the MFA directing program and a two-time alumna of the school herself, led a Q&A with Lavey.

“It’s one of my favorite things, to have a conversation with Martha,” said Thebus, embarking on an intimate and often contemplative discussion.

Thebus inquired about the path Lavey’s taken to get to her current position. “For those of us in the arts, it’s not like it’s a straight road,” added Thebus.

That’s when Lavey said, with quiet reflection, that she’s leaving her role as artistic director, handing the baton to Anna D. Shapiro—also a professor in Northwestern’s theatre department and department chair. As she faces the unknown, Lavey noted that she relates to the audience. “Upon my leaving, I feel, as many of you probably feel at this moment, ‘What do I do?’” she smiled. “It’s very humbling.”

Lavey said that as she starts on her new journey, she plans to do what she’s always done: follow her intuition. That’s what led her to Steppenwolf in the first place, more than three decades ago. Back then, she says, she alternated between a number of jobs—babysitter, waitress, receptionist, teacher, actress. Instinct drew her to Steppenwolf, which, in the early ’80s, was a storefront theatre that distinguished itself by giving performers a strong voice in the company.

She saw a performance of Say Goodnight, Gracie, and thought to herself, “By golly, if I can ever act with people that good, I would be happy.”

She began taking classes, and before long, under her first director—John Malkovich—she was acting with people that good. “And I was right,” she said. “I was happy.” She went on to become the interim artistic director and, in 1995, artistic director.

Under her two decades of leadership, the ensemble grew to 44 members and won nine of its 12 Tony Awards, while also garnering a National Medal of the Arts and the Illinois Arts Legend Award. The theatre also established a number of new programs, including a program for young adults and a leadership program for emerging arts managers and designers. 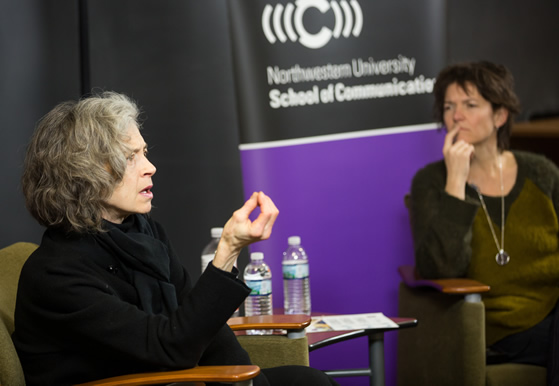 Lavey still becomes animated when talking about her love of the craft. She said she sees theatre as a way for humans to grow and learn from one another. It’s a place where the audience gets to bear witness to the manner in which others resolve conflict. “At the heart of making theatre are precious tools for citizenship,” she said. “How do we grow more eloquent in our understanding of human interaction?”

She shared a number of valuable lessons she learned along the way, advising the audience to be flexible and go with the flow; don’t hold grudges; accept that you’re not alone and use the resources around you; and work on projects you love.

As Lavey leaves the Steppenwolf stage and returns to the world’s stage, she’ll no doubt be following her own advice. While she’s not exactly sure where she’s headed, she’s confident she’ll know it when she sees it.

“As I step away from it, I want to find my poetry,” she said. “As an artist, that’s our privilege in the world.”

The MSLCE speaker series continues Feb. 4 with a visit from Sheetal Prajapati (WCAS02), assistant Director of learning and artists initiatives at the Museum of Modern Art in New York, and March 4 with a visit from Michael Knobloch (C92), president of film music and publishing, Universal Pictures.

NextPassion over knowledge is key in advertising, Tucker saysNext